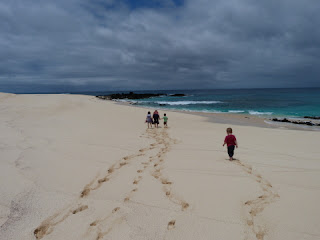 We stayed in George Town – the capital of Ascension. It seemed to us the epitome of a one horse town, but without the horse. We hired a car, or rather a long wheel-base five seat pick-up truck, which was quite an experience to drive, and explored as much of the island as we could in the time we had. 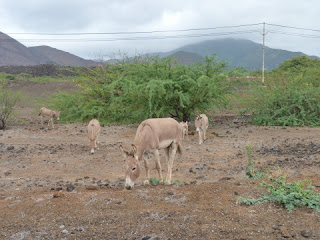 Many of the roads were lined with warnings not to stop or to stray off the road because much of Ascension is occupied by an RAF/USAF base and they have a huge amount of communications equipment and also firing ranges. I just tried not to think about it! 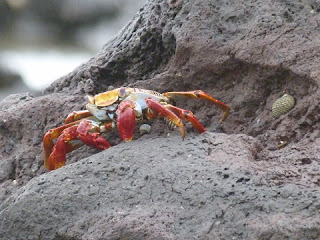 We wound down a long and twisting path towards the coast in the hopes of finding the blow hole which we had read about – a place where the sea goes under the rock and then is forced up through a small hole. The road ran out by some buildings owned by the European Space Agency. Not really having a clue where to go next, I went and knocked on the door. A very helpful chap pointed us down a rough path that appeared to go straight over the cliff. In reality it followed a narrow gully through what was clearly an ancient lava field. The cliffs sort of disintegrated when rubbed because they were made of ash. After a bit of a scramble we came out onto a beautiful beach made of crushed shells. There were gorgeous shells everywhere and the Smalls and I filled our pockets. J spent a long time photographing the crabs which were scuttling all over the rocks. We spotted the blow hole a little way along the beach and made our way towards it, getting sprayed with water every time it went off. By circling round to the other side we could get quite close without getting wet as the strong wind whipped the spray away. The hole was about a foot across, and had been created by the erosion of the softer ash-rock in amongst the harder lava. It really was spectacular, the water went about twenty feet into the air. 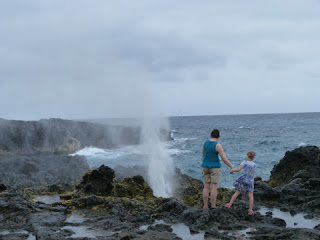 We explored Ascension’s second community – Two Boats and had dip in the swimming pool at the ‘club’. Then we sought out the only two beaches that are ever safe for swimming, English Bay and Comfortless Cove. The water was very rough at both but we managed a paddle. English Bay is surrounded by miles of aerials, overhead cables and satellite dishes which all power the BBC World Service transmissions. 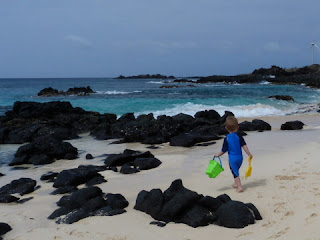 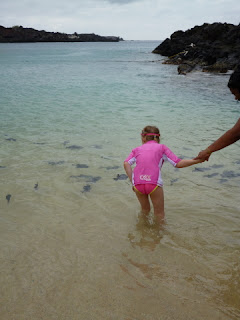 The highlight of our couple of days on Ascension was visiting Green Mountain. In the centre of the island the highest peak is very often swathed in thick cloud. As we approached it the vegetation became less sparse and a wider variety of plants grew. As we climbed the twisting road it looked more like the countryside at home. I failed to take in any of this because I was driving. The road was a single lane with a very sharp hairpin bend every hundred yards or so. As we went up the road became steeper and the bends closer together. The long wheel-base of the truck meant that it had a huge turning circle, so after a while I had to take every bend in a three point turn. At one point I just couldn’t make it round. The nose of the truck was rising up above us as the curve went steeply up hill and we just kept slipping backwards. Not exactly the ideal situation for having to work out how to engage four-wheel drive and then how to drive with it on! 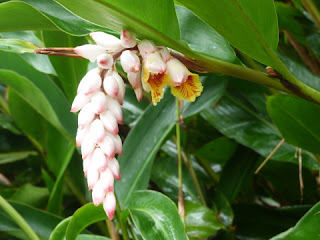 Eventually the tarmac ran out and the last few bends were on muddy track before that ran out too. I parked up as best I could and tried to ignore the horrible burning smell coming from the engine. When we consulted the map it became clear that we had somehow missed the car park which we had been aiming for and had come much further up the hill than we had intended. As it happened it was a good thing too because the Smalls would never have managed to walk all the way up. 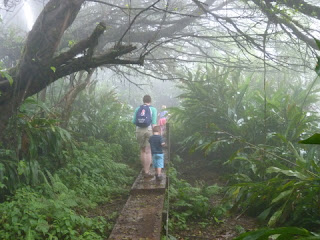 We followed a marked path further up and into the clouds. There was ginger planted each side of the path to act as a wind break. We passed bananas, palms and trees dripping with moss and creepers before being swallowed up by a grove of bamboo. We passed canes as thick as my arm. It felt very surreal, unable to see more than a few yards in the mist and expecting at any moment to reach the glass of the greenhouse I felt we must be in. In the middle of the bamboo we found the dew pond – until the desalination plant was built this was a very necessary emergency water supply for the island. We also found the highest point. Marked, weirdly I thought, by an anchor chain. 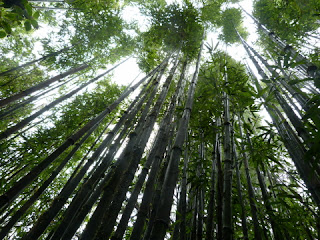 Carefully inching our way back down the track we found the car park and a lovely picnic site, complete with playground and banana plants which we took full advantage of. 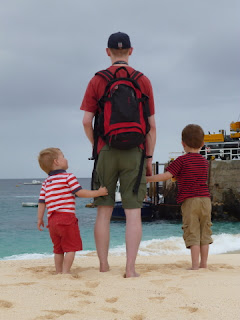 Our stay on Ascension was disconcertingly surreal but by no means unpleasant, but we were anxious to be off and spent a couple of hours watching the crane lower containers off the quay onto barges that were then taken out to the RMS St Helena where her crane pulled them aboard, very aware that we had to do the same thing ourselves when we were to board later in the day.
xx
Posted by Stitches and Seeds at 14:10