A Year in the Garden - February

Welcome back to the garden. I found a sunny morning to show you what I have been up to. I have done pretty well in the garden this month despite the wind and rain and bouts of fluy cold hitting the whole family. I have been concentrating on the veg patch, rearranging and titivating the permanent plants - mostly soft fruits. It all looks to lovely and tidy that I am really spurred on to do the next bit. 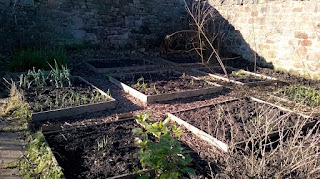 It has been a bit like musical chairs. We moved the rhubarb into the veg patch a few years ago from the shady corner where it had been when we inherited the garden. Of course, given well dug and improved soil and  a sunny spot it grew HUGE. For the last few years we have had way more rhubarb than we can possibly use and it has over shadowed the three nearest veg beds, making them almost unusable.  It had to go.

Half of the crowns are now in an unused piece of ground under the blackcurrant bushes (also pruned for the first time in years - aren't I doing well...) The other half have been given away to good homes. 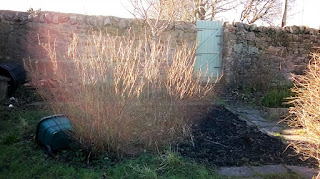 In another fit of madness a few years ago, we gathered together the three gooseberry bushes that were scattered around the garden and put them into one of the flower beds way away from the veg patch. It was not a good plan. The resulting thorny tangle was too close to a path and made it impossible to properly look after the rest of the plants. 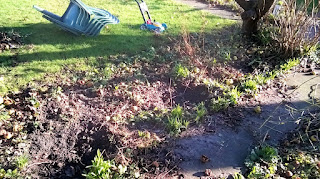 I have moved them to where the rhubarb had been and now have lots of lovely space to fill with new flowers, hurrah hurrah! It's still a bit of a mess but I will get to it. In their new home, the gooseberries are well away from paths and have plenty of  space. I do need to think about what I might under-plant them with though, to stop it becoming a weed-fest. 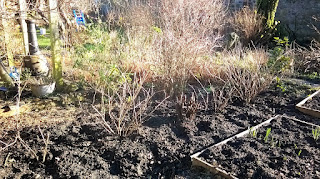 Next up for a new home were the raspberries. They had been in a spot that was way too shady and had also gone unpruned for far too long. Plus the wall behind them is in dire need of repointing which will be much easier if we can actually reach it. 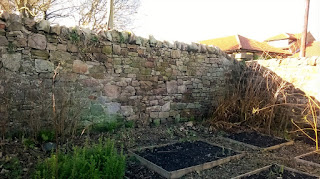 I have reclaimed a bed against a sunnier wall for them and actually moved (and pruned) them yesterday after these pictures were taken. I think I might under-plant them with strawberries. We have heaps of the little alpine ones all over the place so maybe the fatter sort would do well too. 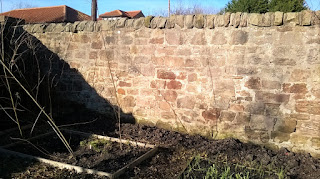 The rest of the garden looks much as it did in January, except that if you look closely there are little jewels appearing all over the place. I love love love how they shine in the sun, even if I did have to lie on the ground to see up into the flower of the hellebore. 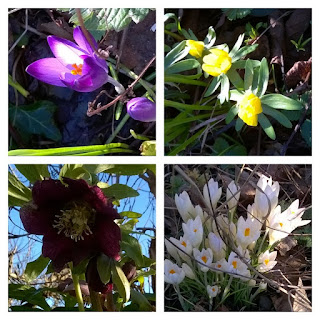 I even spotted a rose! 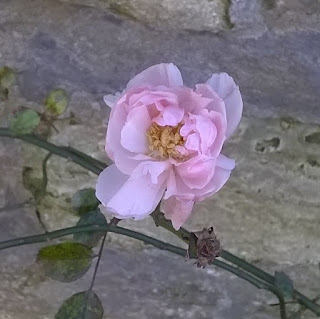 xx
Posted by Stitches and Seeds at 11:54