Well, the beginning of June (and the end of May) have been a mad and crazy place to be. My Dad has been staying with us for most of May, and 3/4 of the way in J broke his elbow playing football and has been backwards and forwards to the hospital like a yoyo since. It certainly has not been a slow month, but it has made me determined to slow down a bit in June...
I am linking up as usual with these lovely peeps:
Nourish
My Dad needs a gluten free diet so I have had to think a bit harder about meals this month. I did invest in some gluten free pasta and attempted some bread (not a success). I made some scones which were ok, some slightly weird cup cakes and a lot of flapjack. An extra mouth to feed does not sound much but some days it seemed like I had only just finished clearing up from one meal before I had to start on the next.﻿
Prepare
I'm afraid I have nothing here. It was a hand to mouth sort of month. 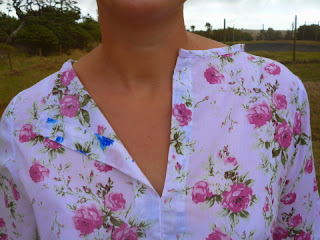 I have given up on vegetables completely now. A few herbs are doing ok but the fruit fly has obliterated everything else. Actually, that is not entirely true. I have some unlikely looking leeks in a flower tub which may turn out ok. I have decided flowers is the way to go and have gathered a few plants and sewn some seeds. I must do a post about them soon.

Nothing new here either. 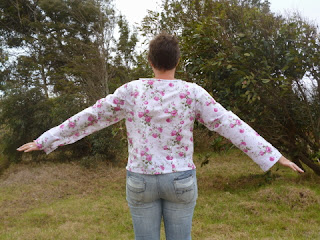 We have been having a rather longer summer here than anyone bargained for, and as a result the island has a rather serious water shortage. I have been saving my washing up water for the plants and we have chivvied the powers-that-be into finally fixing the shower. Of course, the last couple of days have been wet and windy so no need to water the plants, but we need a few weeks of rain to refill the reservoirs.

Well, as you can see I finally got some photos taken of the summer shirt I made. I am very please with the placket (I do think that is a lovely word) but I am a little disappointed with the pattern. It is a little short in the back and was so wide when finished that I had to take two big tucks in it. I measured myself very carefully and followed the pattern to the letter. I still like wearing it though which is the main thing, and I love the loooooong sleeves!

I also made my lovely patchwork blanket and lots of crocheted bits for a charity event. 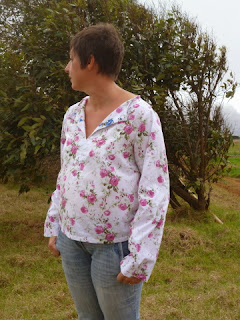 Well, the patchwork blanket was a voyage of discovery! I also read an amazing book which opened my eyes a little to the Middle East - it was Blood and Sand by Frank Gardener. He was a BBC correspondent working in Riyadh when he was shot repeatedly in the back. The book describes his relationship with the region and his recovery and readjustment after his ordeal. It sounds really depressing, but actually it is just the opposite: interesting and full of hope.

The lady who has taught me the flax weaving asked me to take part in a charity event this month. I was to go along and make some things to be auctioned off. I ended up acting as auctioneer to a tough crowd but enjoyed being part of a truly 'saint' event. I'll try and do a whole post about it soon. I took loads of pics but I have no idea how they turned out since I haven't even looked at them! 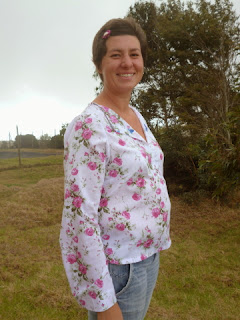 I really enjoyed having my Dad here, and we did some really fun sight-seeing, had nice meals out, and it was lovely seeing the Smalls spending lots of time with him. I enjoyed being part of St Helena Day very much indeed. The broken elbow and all that goes with it is less fun but that's how it is sometimes.

How was May for you?

Posted by Stitches and Seeds at 19:12