Take only pictures and leave only footprints

Once again I have been away too long! Every time I try to streamline life and slow down a bit, things get piled back on. This week we have a last minute announcement from school that the Smalls are to go dressed up as characters from a story or nursery rhym tomorrow. After a little thought we have decided on Angelina Ballerina and Bob the Builder, neither of which should be too taxing. I am also making preparations for Tall Girl's birthday party on Saturday. She will be seven next week!
Today I am going to share a special place with you. I took the Smalls during half term, although Giant Baby and I had visited before...
﻿ 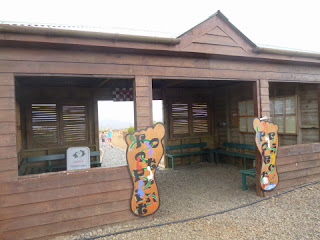 I have written before about how there are efforts being made to replant many of the endemic plant species in protected parts of the island, and to remove competing plants from those areas. Well this place is known as the Millennium Forest. Since 2000 all sorts of people have planted trees in a scrubby area between the landfill site and the airport-in-progress. Long ago this was the site of the Great Wood which covered the eastern part of the island. The trees are grown from seed and cuttings by the National Trust who manage the site, and are planted by school children, brownies, guides, dignitaries and tourists. One species, the St Helena ebony was thought to be extinct before a single example was discovered clinging to the side of a cliff in a remote and inaccessible part of the island. 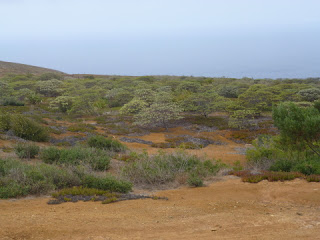 Today there are 10,000 plants covering 38 hectares. Eventually the forest will cover 250 hectares. 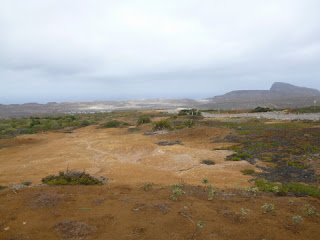 You can see the airport site in the background of this picture. 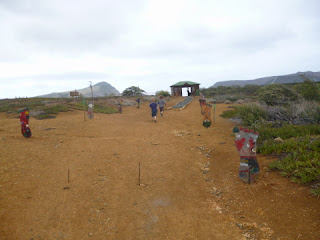 Planting trees isn't the only way you can contribute to the project. A walk through the woods is being developed and the path is lined with footprints. The idea is to raise awareness of our carbon footprint and what we can do to conserve energy. 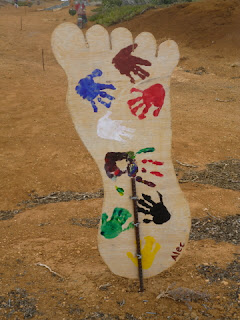 When Giant Baby and I came before, we made a footprint and this time we went to find it along the path. 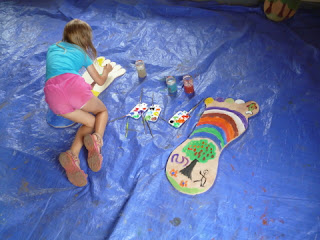 Tall Girl and Tiny Boy made their own footprints this time. 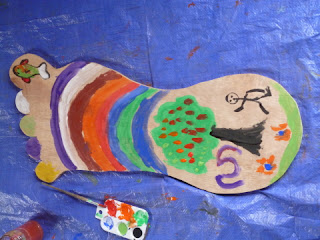 Tiny Boy's featured an appl,e orange and pear tree, a rainbow, snake, self portrait and a green flying shark. 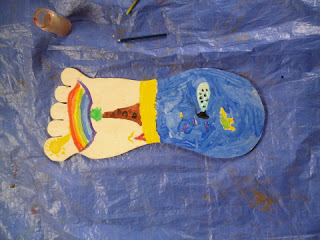 Tall Girl's featured an under-the-sea scene with a tree and rainbow. 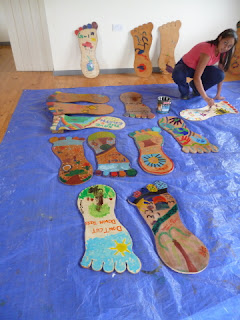 Once the paint is dry, the footprints are varnished before going out along the path. 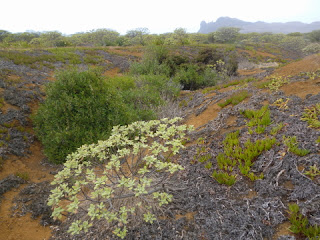 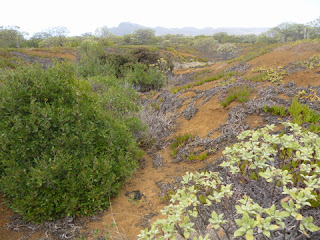 Information boards around a nature trail tell you about the project in easily digested snippets, 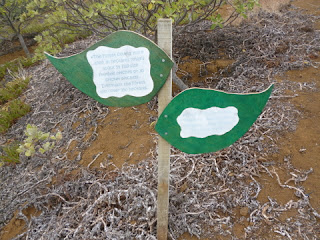 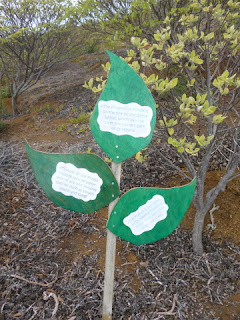 and you can make your mark by signing the visitors board. 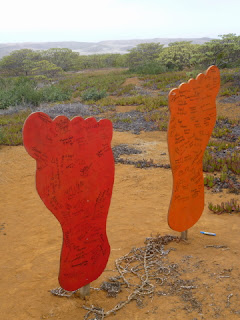 A shining example of what can be done by when limited resources are used with imagination and enthusiasm.

xx
Posted by Stitches and Seeds at 12:31