The decorations are safely away, the excess chocolate has been consumed, the new toys are forgotten and the old favourites are returned to and J is back at work BUT Christmas part 2 has finally arrived!

Many lovely people sent e messages of various types to say they had posted things to us for Christmas, but only two arrived in the post in December. The Royal Mail Ship (the clue's in the title) has been back since then, but came via Capetown, so again, no mail for us. On Saturday though, it arrived from Ascension Island.

Mail is not delivered here - you have to go into the post office and suffer the great indignity of asking if there is anything for you. You try not to look too hopeful as the lady disappears into the back room, then returns to check the various lists. Then you recompose your face and try no to look too disappointed if there is nothing for you.

So this morning, after a pretty terrible hour trying to do a bit of shopping with three grumpy Smalls in tow, it was with great trepidation that I joined the back of the queue. The Smalls were taking it in turn to try and kill each other loudly on the steps outside and the queue was glacial. Finally I reached the front, repeated our surname twice and crossed my fingers that she was going to look in the right pile. After an age she reappeared, consulted the letters list and the parcels list, disappeared again and then... Look! 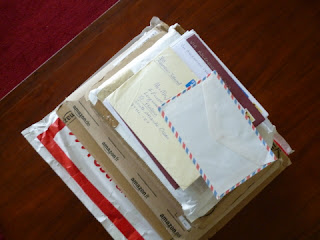 A pile! An actual pile. All for us. I make that five parcels and eight letters.

As you can tell I am extremely excited. Two things that I am pretty sure we are expecting don't appear to be here but never the less... 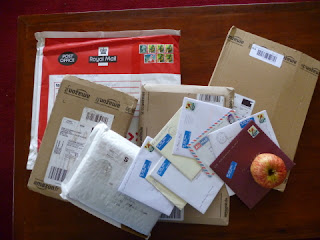 By the way, in my humble opinion, we have the coolest address: 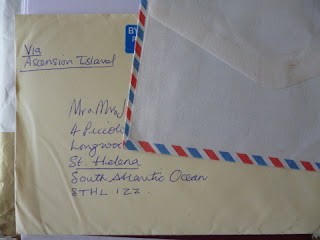 Christmas part 2 (b) happens later. We can't open them until J gets home from work. That would just be mean.

xx
Posted by Stitches and Seeds at 14:08